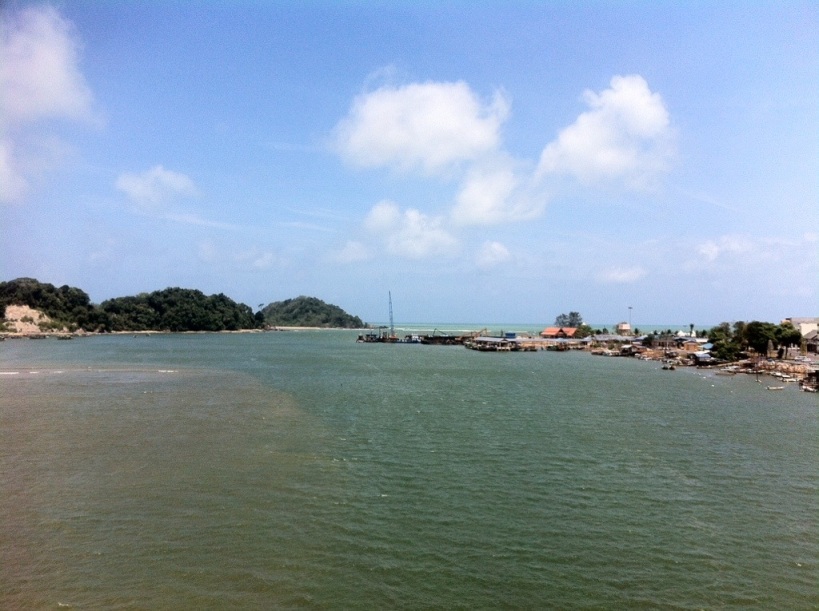 I’m in Kuala Terengganu now. It’s the capital of the North-East, an area know for beaches, conservative Islam and a weird, floury, fish sausage called Keropok Lekor. The city itself, like much of Malaysia, is in a kind of developmental purgatory. It’s not littered by flashing lights, advertisements and convenience stores like most rich cities but it’s not exactly a shanty town either. There’s heaps of impromptu stalls made from building shrapnel and houses with similar constitutions but they’re evenly distributed through streets that also have apple stores, outrageous mosques and hotels that look like hospital receptions. It made me wonder – would Sydney be as randomly distributed and chaotic if we never had planning controls or is it just a cultural difference.

Every morning when I wake up I need two things – coffee with SCM and wifi so I can plan where to ride. Farhan’s internet was about as reloable about Zimbabwe’s economy so I infiltrated McDonald’s to get some real juicy shit.
This is what the internet told me:
– Monday is going to thunderstorm all day and after Dungun (the next town out of Kerteh) there’s pretty much nothing until Marang, which is about 94km away.
– Tuesday is going to be 31C but because there won’t be any wind the ground heat will be 38C.
Considering this information I decided on two things.
1. Water is just not going to cut it. I’ll need to fill my bottles with coconut juice so I can be extra hydrated and extra happy.
2. Google maps is probably full of shit, I’m sure there’ll be some villages or something before between Dungun.

The internet ended up being extra wrong. The only stormy part of the day was a strong wind, which was only annoying because it prevented me from riding fast than 12km an hour. There were also plenty of villages after Dungun, a constant string of them in fact – like a much tastier and less racist Central Coast. I stopped in one of them for a snack (steamed bun with caramelised pandan butter and some more coconut juice) and asked the stall owner where I should stay for the night. She said the were some cheap chalets by the beach for about $8. Near a turtle sanctuary a bit further up the highway.

Rantau Abang consisted of five hotels, a handful of food stalls and a turtle sanctuary. Two of the hotels were empty – doors open, keys hanging on the wall but no staff, no customers, no one. Another two were the just the same except someone for someone belatedly greeting me after hearing me yell. One of them was a young kid and the other an old man – they didn’t speak much english but they managed to communicate to me the chalets were designed for families or groups so it would be very expensive for me to stay in one alone. I tried to say ‘there is no one here, just give me a discount and let me stay’ but they weren’t interested, it seemed like a huge effort just to talk to me. The last hotel had a fancy name and a gate with golden things on it so I didn’t bother checking the price there. The turtle sanctuary had a few cleaners inside and all but one of the food stalls were empty too. What a weird place, I buggered off out of there because it was eerie as.

Unfortunately after the town of ghost turtles there was fuck all besides for forests, beaches and hawkers selling roast corn and corn juice. It was getting late so I promised myself that I would stay in the first place I saw. 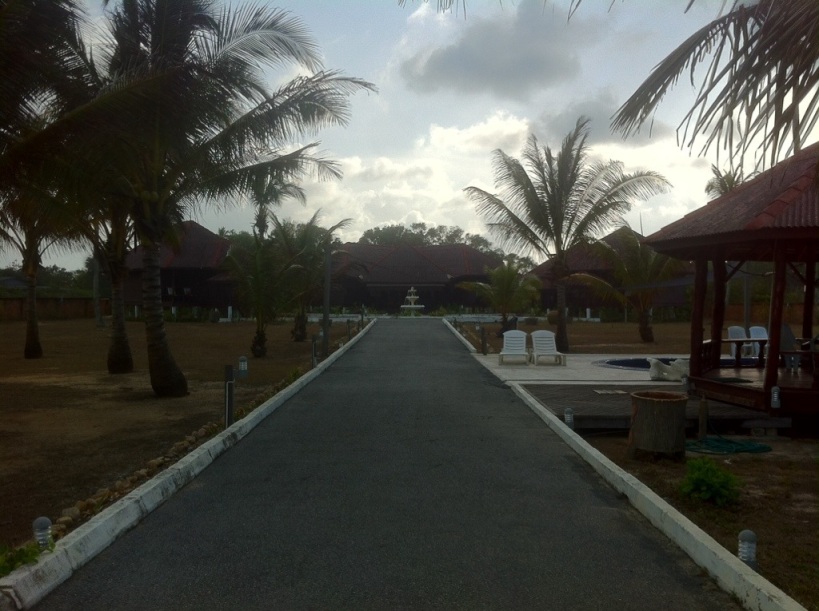 The White Sand Guest Cottage: Villas with leopard skin couches, a private chef, diving lessons and a pool which looks out onto the ocean. Probably out of my price range but a promise is a promise. As soon as I rode in a Middle aged Chinese-Malay man with a well groomed moustache and an impressively neutral accent greeted me.

“How much for your cheapest room?”

“How much is it?” I made a desperation play with my eyebrows and he responded with a half raise.

“80 ringgit for one night.” I sighed and started calculating whether I could get to Marang before night fall.

“Deal.” I gave him a broad smile and shook his hand.

To give you an idea of how luxurious this hotel felt to me, here’s a summary of my experience with budget hotels so far.
Because they are completely unprepared for solo travellers most rooms cost 35 – 60 ($12-20) for two people. If you’re alone you pay the total and enjoy the freedom of choosing between two beds. The beds are usually covered by a sheet that feels like battered carpet and make metallic squeaks when you roll on them. Most rooms are sparsely cleaned with the bathrooms hit the worst. The bathrooms, most often in a shared space, have a tap with either a hose or a bucket, fancier ones will have a detachable shower head with the water pressure of a juice machine. There is usually a choice (about 5-10 ringgit) on whether you want a fan or air con. I always go fan because it’s cheaper and I don’t want to wrap myself in carpet anyway. Most rooms have a tv with two channels and a completely useless piece of extra furniture like a desk with no chair or an empty, dog sized cabinet.

I realise now that the first offer of 80 ringgit must have been a huge discount already. My cottage had three rooms, a huge bed with a real doona, a good shower, air con, a tv and at least four pieces of furniture! I was also the only one there, so the chef, pool and the central open-air cottage were all mine to use as I liked. 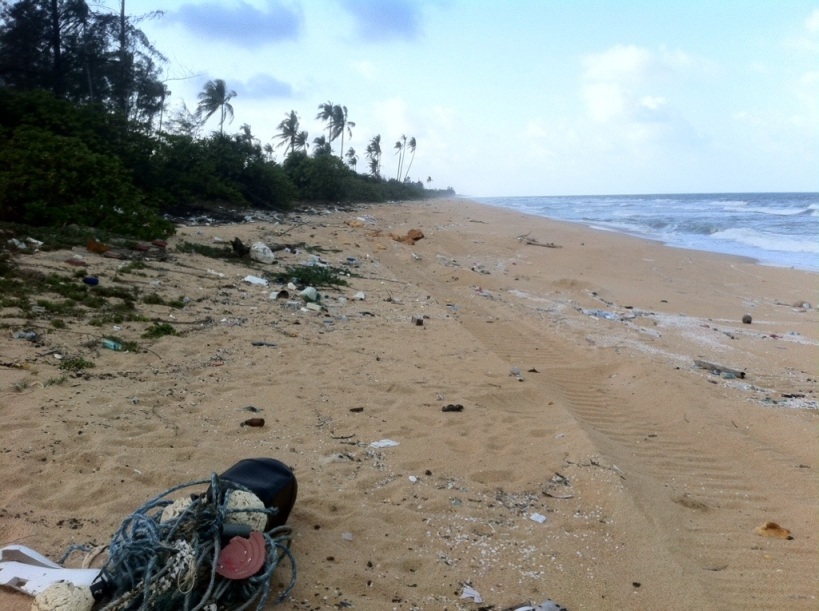 All the beaches I have seen look like this – covered from end to end with garbage. If it wasn’t for the garbage many of them would be gracing the front of tawdry post cards – they had all the right features perfectly fine sand, crystal-clear water, surrounded by rainforests etc. Instead no one ever uses them because they look like the aftermath of a street parade. I’ve thought a lot about how Malaysia is much more organised and wealthy than it’s neighbours and how easy it should be for the government to clean them up but I guess it’s a cultural problem. Like that guy when I asked him where I should put my empty water bottle and he just laughed and pointed to the forest.

Today I had one of the best pieces of fish I’ve ever had. It was a whole catfish marinated and then baked in some kind of intensely flavorsome chilli and palm sugar paste. They probably did something else to it as well because that is not an adequate explanation of how something could taste so fantastic.

I love Limon ais. If I could replace all of my fingers with limon ais dispensers I would do it and spend the rest of my life wishing I had ten mouths.

*Limon ais is like lemonade but with lime juice and sometimes coconut.