So much stuff happened in the last two days I’m at a bit of a loss of how to comprehend it all. I’ll go chronologically.

Penang:
There’s kind of a weird setup. On the main land is a regular Malaysian town, blackened with car exhaust and quiet – the kind you would imagine crawling onto the side of a highway. The island half is a mixture of weathered colonial architecture, luscious jungle and rampant development. The island’s shore line is guarded by a line of sky-goading apartment blocks that bring less aesthetic value than a heap of roadkill but then a few blocks back there are pebbled streets hanging onto the last vestiges of their past. It’s beautiful, ugly and swamped by tourists.

Malaysians call Penang food heaven. You could say that about most of Malaysia but this place seems to have some extra multi-cultural oomph. 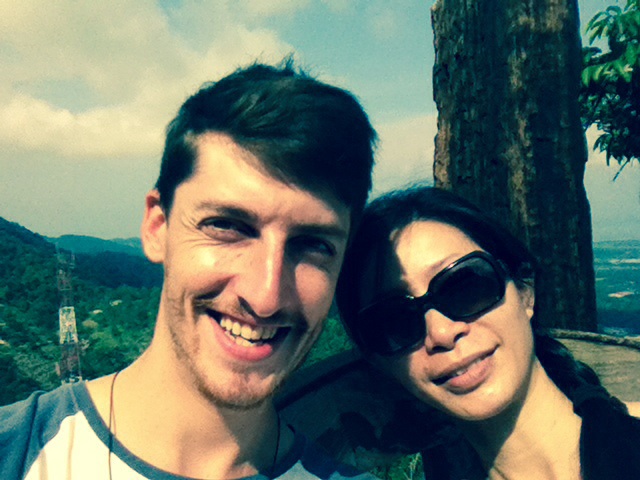 The local I went to meet was Ru, a Chinese woman with lots of stories and even more ways to say yes. If she had any smidgen of shame, embarrassment or fear I couldn’t tell – she opened up her entire world to me. Her entire life was laid out in front of me bare and trusting like a naked body. I became completely infected by it. Soon I was sharing things about my life I’ve barely told anyone. Soon after that I was saying things I’ve never said – things I didn’t even know I could say – things I didn’t know about myself yet. It was like I had suddenly stumbled into an epiphany factory – at every turn in the conversation – press, bang, whizz, shuffle, dot – my mind churning, working, creating – epiphanies rolling out on a conveyor belt, freely available for me to choose.

Most incredibly and surprisingly to me, Ru seemed to have all these strange links to my life. Whenever she enthusiastically said yes, which she did a lot, it was the perfect image of a great friend of mine*. As if her face and voice had magically reformed for a millisecond, like a subliminal advertisement imprinting my friend’s image subconsciously in my mind.
One of her many philosophies was formed into the mantra ‘everything happens for a reason’, exactly what my mum says. There’s many things this can mean but Ru said it with exactly the same intent as my mum.
Most startling for me, and probably for Ru as well, was her similarity to the book I just finished, Haruki Murakami’s Dance, Dance, Dance.

“You can see dots behind you,” she charades a line of points like an ellipses strewn across an empty page.

“You have to keep moving so when the dots in front of you come you know how to react.”

“Like dancing.” I responded. Yes! She said – randomness is inevitable. When it approaches you have to accept it with constant movement, so you are not swept away. Just like the book I thought.

Just keep dancing and it will all work out. Isn’t this how we met?

When I went to the train station in Bangkok I was told all the tickets to Penang were sold out for three days. I went to the next counter just to double check.

“It’s all sold ou . . . wait no. Someone has just cancelled.” There was one ticket for the train in two hours, everything else was sold out for three days. I got the ticket and went to wait in a cafe. I had an iced coffee and used their wifi to contact Ru through a couchsurfing like network for bike tourists*. She had only signed up the day before. Ru told me later that, being a single woman, she felt a bit unsure about meeting a lone traveller but it just so happened that the other person I’d contacted was a good friend of hers. He had read my blog and told her to check it out. Ru read what I wrote about love and saying goodbye. She was moved and thought to herself I have to meet this guy. I had only written that the day before.

Now I think – did this all mean something? Am I connected to this woman? Why did this happen? Perhaps if I was more spiritual I would be more able and willing to answer these questions but as it is I am more than content to remember just as a great day.

Ru took me on a tour of Penang – sights, stories and the best and brightest tastes the island had to offer.

The following was eaten all in one afternoon. 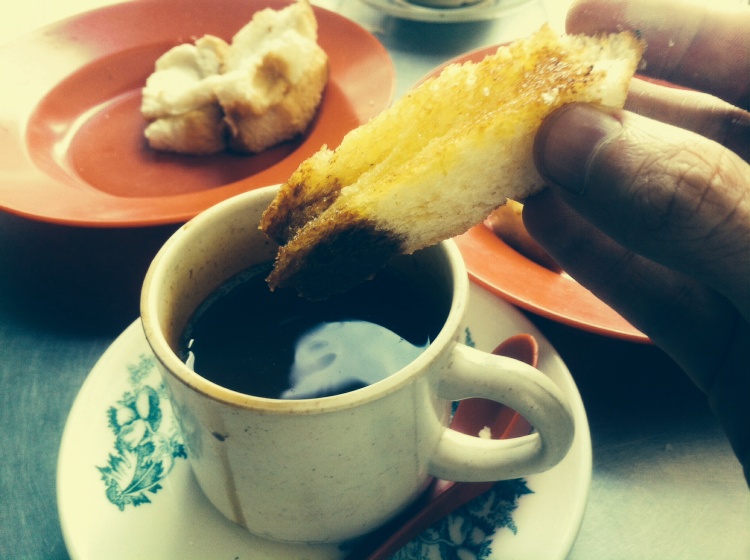 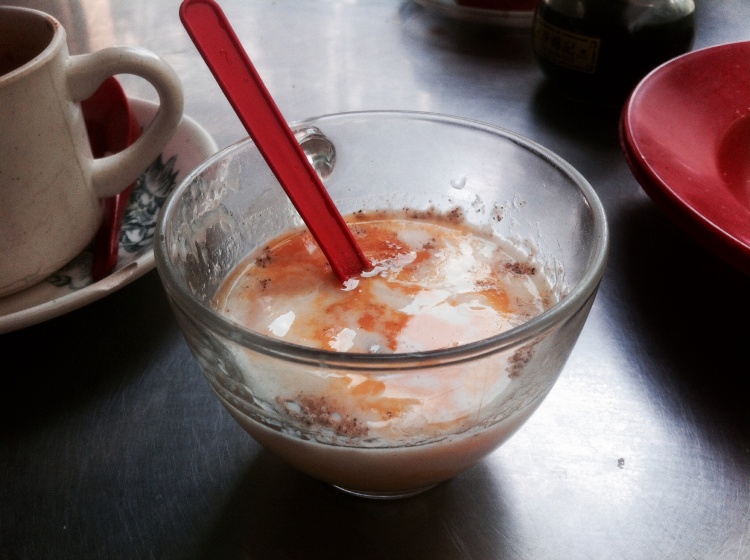 It looks just like buttered wonder white but it’s been toasted over hot charcoals and the kaya (Malaysian spread made with egg and sugar) is home-brewed for hours using duck eggs. Tradition dictates that you dip your toast in coffee or poached egg. Good idea tradition. Fucking excellent. 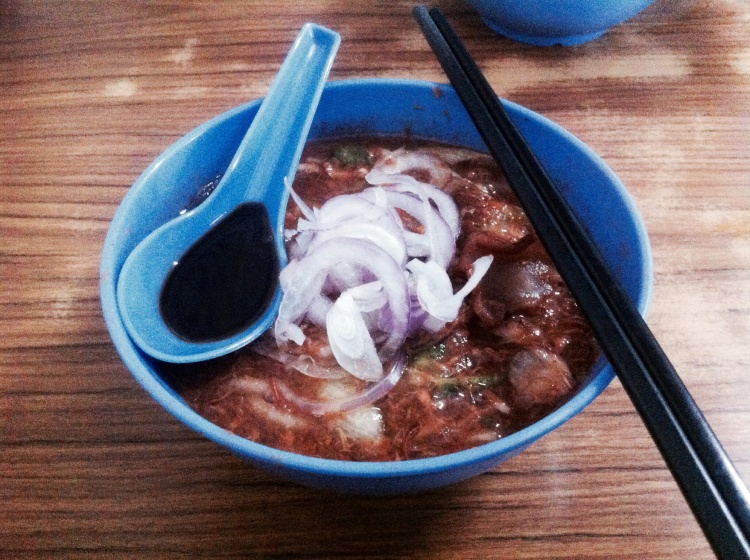 Like no Laksa I’ve had before. This wasn’t creamy and oily like the laksa we get in Sydney. It was fishy, sour and rich with big noodles and heaps of bits. If fishy and sour founds offensive to you, you’re going to miss some thing amazing. Fucking excellent.

Also surprisingly different from what we have at home. There’s no chicken or pork – a traditional char kway teow has sweet Chinese sausage, marinated clams and egg. Served with a glass of herbal sugar cane tea. It was thunder-storming when we ate this. Fucking excellent. 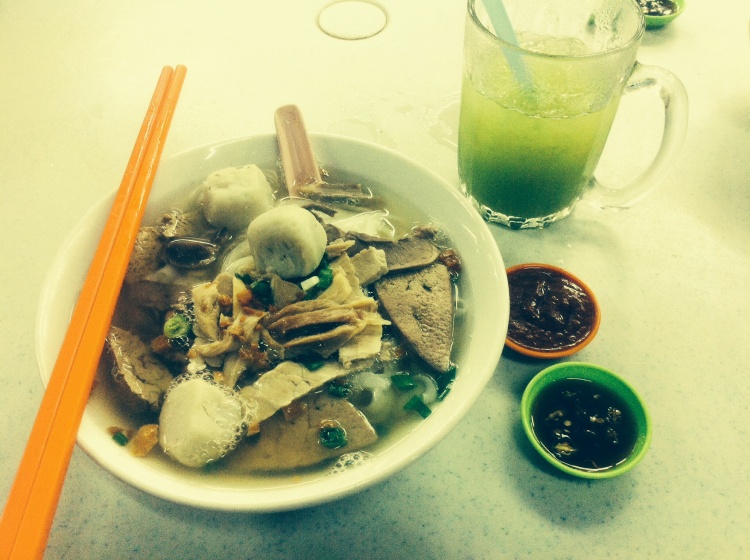 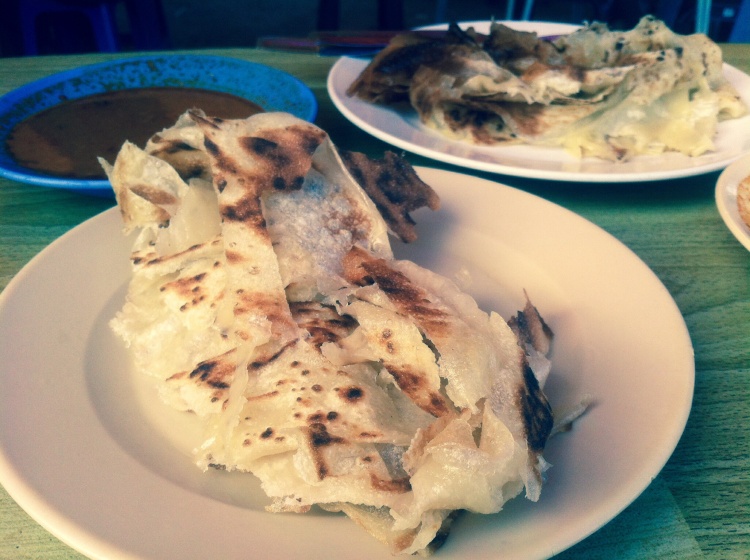 Roti with butter, roti with sardine and eggs and roti as is. Crisp on the outside and soft in the middle. Served with curry and coffee. Fucking excellent.

My bike ride from Penang was fucking long and I had started the morning really late after getting a tour of the island. I was paranoid about having to ride at night so I kept putting off my lunch saying to myself ‘I’ll just eat a really big dinner’ or ‘I ate enough yesterday anyway’. I was going strong up until about 2:30pm when I rode past the most hustlin’ restaurant I ever did see. How fucking good must that be? I couldn’t say no.

I enthusiastically bundled down into the crowd. Almost immediately I was surrounded by a throng of middle-aged men in fancy Islamic get up.

“You want to eat, drink?” One of them asked me.

He led me to a stretch of bubbling bain-maries next to a young man singing karaoke. I dolled my plate up with every curry on offer and sat myself at the end of table closest to the entertainment. The man next me, a gurgly smiler with a outfit befitting a 70s Spanish remake of Save the Last Dance, took me under his wing. He was half way through telling me what I was eating when the song finished. He picked up a microphone and stood up, his pink blazer glistening like a slab of sequinned pork fat. He said some stuff in Malay and then pointed to me. I made out the word Australian. Everyone looked at me and a few people hollered. I had no idea what the fuck the was going on. Blazer-man simply said ‘for you’ and we continued chatting about food.

When the next song finished he asked me if I sing. I told him if I sung in front of this crowd everyone would cry. He laughed with tears as if he was suddenly Japanese and animated.

“I sing special for you.” He said again.

Still no fucking idea. The next song came on and he rose with the mic again. Only this time he started singing, singing to me. He was dancing with his hips and one hand held high gesturing to other people to join him. After 30 seconds of feeling awkward and strangely honoured a well dressed old woman with an axelotyle like presence beckoned me to dance. So I did.

At was at this point I noticed a young couple dressed impeccebly in traditional Malay outfits. Everyone else was looking pretty spick and span too and at no corner of the place was any money being exchanged. Holy fuck, I’m at an Islmaic wedding and I’m dancing in front of everyone in bike tights.

I kept twirling regardless, doing my best to keep my bum twirls exciting but unsexy. Mostly I just followed the movement of Blazer man. No one looked offended and most people were smiling. I think I did ok.

During the whole spectacle a young man commandeered my phone.

Terong:
Officially the smallest town I’ve ever stayed in. There was no wifi, snack town or tv to watch football so I spent the night in a supermarket talking to the most teddy bear like man I’ve ever met, Rajoo. 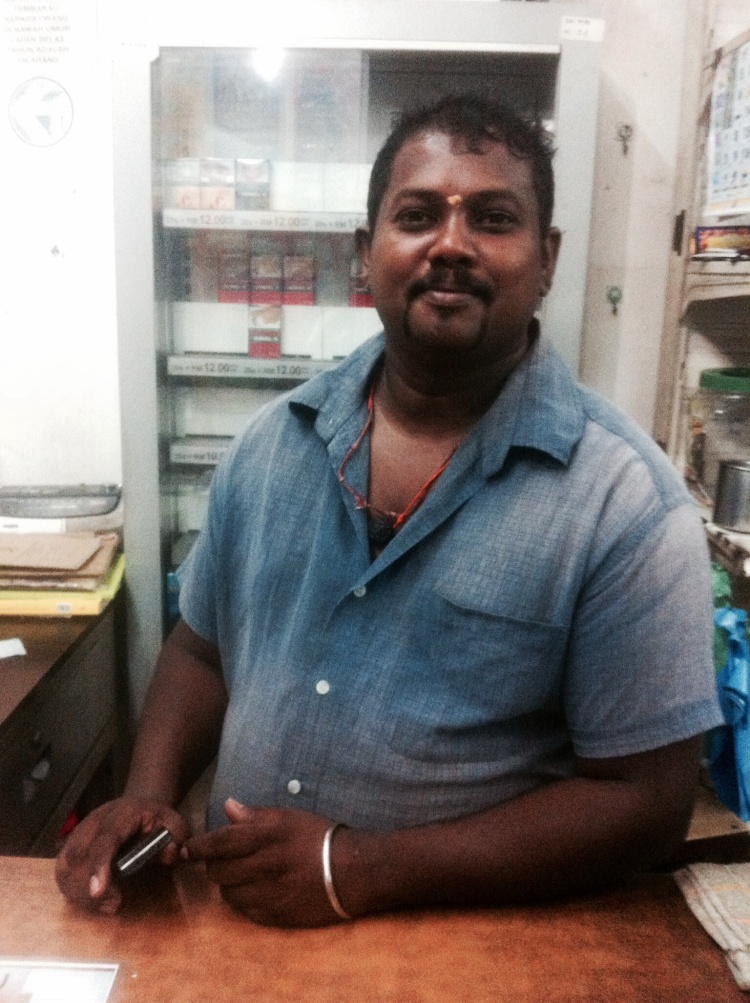 Rajoo learnt english from a textbook he found in the bin. Whenever he meets somone interesting he writes a story about them and sends it to the Tamil papers.

So am I Rajoo.

*Honey Vader. A bewitching french girl I met in Sweden several years. One of the closest things to magic the real world has produced.
*Essentially the same format as couchsurfing but for people bike touring.