When I woke up yesterday the first thing I noticed was my shin. It felt like a dehydrated slug undergoing acupuncture – totally unresponsive to movement and full off pain. Looks like our plan to ride around the coast of Jeju island is over. I hate being a cripple.

Our new plan is to hitchhike around the island. We’ll stop whenever we feel like it and sleep at whatever city or town has the best views or the cheapest jimjilbang. We’ve got this huge and unhelpful map of the island to guide us. It’s totally unclear where the cities are and what are roads and what are bike lanes but it’s dotted with thousands of pink highlighted tourist attractions. It looks like it has chicken pocks. Yesterday morning we tried to sort through the pocks. We decided the most appealing dot was a giant, cavernous, underground lava tube.

But now what? How do I get places? Usually I would just ride there. All I have to do to plan is look up the roads to make sure I don’t end up dead on the side of an expressway. But I can’t ride or walk for that matter, it’s 20km and my leg is fucked. I guess we’ll get a bus to the highway and then hitchhike? What bus number do we get? Where does that bus leave? How do we even get there? Getting places in foreign countries is really hard. There’s so much planing involved.

We ended up going to two tourist information centres, getting three busses and hitchhiking from the highway. It would have been quicker to ride my bike the 20km. It didn’t matter too much though because we ended up here. 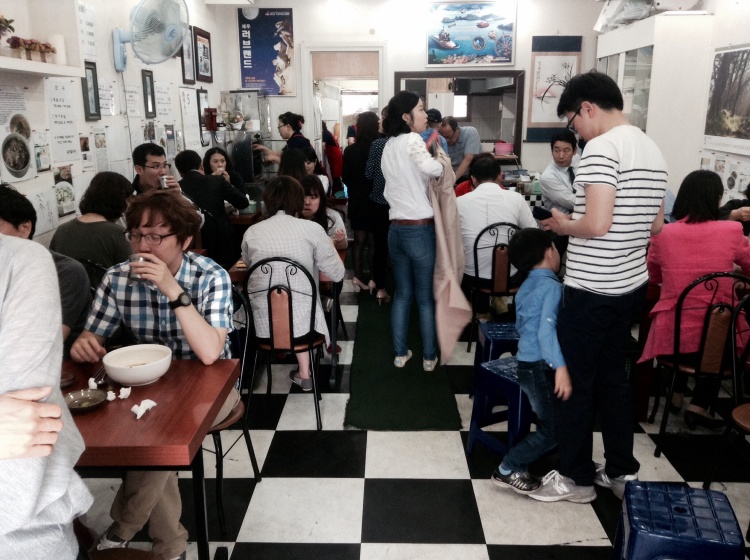 Only three things on the menu, all of them delicious and a queue out the door. Pretty much my perfect idea of a food tourism.

Like every other country in the world I’ve hitchted everyone in Korea has told me it’s impossible and dangerous but they couldn’t be more wrong. Hitchhiking in South Korea is ridiculously easy. 80% of the times I’ve stuck my thumb out a car has stopped instantly – no exaggeration, literally the very next car driving past. All the other times I’ve never had to wait longer than 10 minutes*. Many of the drivers have taken me directly to where I needed to go and some have shouted me lunch at their favourite restaurants. For anyone reading this and thinking about going to South Korea I couldn’t recommend it more. It’s fast, free, safe and far more social than any other mode of transport around the country. If you’re lucky you might even get some free food and accommodation.

So the lava tube ended being nothing more than a big hole in ground. I know that’s what caves are but aren’t they supposed to have interesting rock formations and beautifully carved caverns? This one was just a featureless rock hole. I guess when a cave is made from a river of lava it will necessarily be pretty smoothed – lava is pretty good at melting things after all. This was the cave’s main attraction.

I realise it’s dark but what was I going to do? It’s a cave

We paid to see that. We also paid to go here.

I love the idea of mazes but I’ve never been to a good one.

Pretty much everyone I’ve talked to in Korea told me to go to Jeju. The combined weight of everyone’s advice made me worry Jeju would be a long-abused tourist grotto – farcical tourist attractions, expensive food and beautiful landscapes surrounded by gaudy placards and people asking for money. So far I’ve been about right. Luckily, the local tourism industry hasn’t grown enough arms to cover all of the island’s worth so there is still some pockets of beauty that you can enjoy without expectation, money or queues.

At least four people have told me I can’t swim in the beaches because they’re too cold. You have to wait until summer they said. I have no idea what they’d do at an Australian beach in summer. The water here was way warmer than the seas which lap Sydney’s beaches. I thought it was bliss. I spent the rest of the afternoon telling Nicole what a great day we’d had. 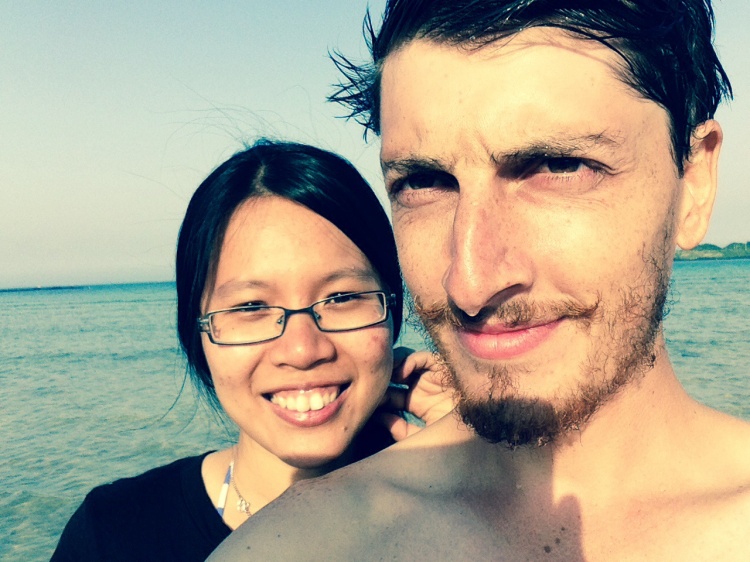 I finally had an appropriately sized meal. Nicole managed to convince a restaurant owner that one dish would be enough for two people. The lady seemed concerned but gave in. No idea what she was worried about. The mackerel stew we got was huge and fucking delicious.

I ate every last scrap of stew, rice, all the side dishes and all of Nicole’s leftovers. It was the perfect sized meal – full but with room for dessert. I never eat dessert here.

Later that night I had a skype chat with Alice. We were talking about whether my newfound rotundness was sexy or not when a young lady interrupted.

“Sorry Alice I have to go.”

The other members of the guesthouse had enjoyed a feast which was typically too enormous for any mortal stomach to endure. They’d had a good go at it but they they needed something special to deplete the BBQ meat mountain so they employed me to help.

There’s no escape. Korea loves to feed me and I love to eat. It’s a delicious and dangerous relationship.

*With the exception of this one time where we got dropped off in a really awful position on the highway on the way to Gurye.