I’m sitting in the airport waiting my for flight out of Korea. I just had a day dream where I’m a grizzly bear. I’ve eaten nothin but lard for seven months and every day a team of gay inuits go over my fur with an afro comb and a flood of beauty products with french names. Simply, I’m the fattest, fluffiest creature ever to walk the Earth. Suddenly a teenage boy appears 10 meters into the forest. He’s pencil thin with long arms that dangle like dead tree vines. It’s Korea. It doesn’t make sense but dreams don’t need to – the boy is Korea. I waddle over and without saying anything I envelope the boy in a hug. Indescribably soft and fluffy rolls fold around his every joint and crevasse. I try to say I love you but can only muster a few annoyingly scooby-doo-like gurgles (I’m a bear remember). It doesn’t matter, Korea understands.

Unfortunately this is just a dream. I’m not a perfectly bio-engineered hugging machine and Korea will never actually understand how much I’ve loved it.

I was feeling rather sad about leaving Korea. I’ve had a great time here and a part of me feels like I might be leaving some adventure behind by going to Europe. BUT I just realised I have a 14 hour stop over in Tokyo. Now the only emotion I’m capable of feeling is excitement. Do you know how many bowls of ramen and sticks of yakitori I can eat in 14 hours? Shit loads, that’s how many.

I spent my last few days in Seoul with Daehee, Yung and a couchsurfer they were hosting named Chris. Daehee and Yung are an attractive couple of medicine graduates who’ve just returned from a couchsurfing journey through Laos, Malaysia and Indonesia. They quit their jobs a while ago and now they’re living the life in Seoul before they emigrate to Canada. Chris is a board game fan with an over sensitive tongue and an under sensitive empathy gland. He likes football, chats and things which make sense. Together the three of them covered pretty much all of my interests.

Board game meetups are probably the same everywhere. Everyone is very nice and even more genuine so it’s easy to integrate socially and learn new games. Usually there’ll be a few strangely competitive dudes and one or more of them will be awkward. Theres a distinct lack of good haircuts (myself included). It’s always very fun.

I stupidly went to toilet between games and got left out of the next round. Oh well I thought. I guess I’ll just do what I would have done anyway, eat.

Pretty much the first thing I saw coming out of the elevator was a young pretty bob-haired* girl childishly nibbling on some balls of fried dough. I may as well have been looking into a crystal ball – minutes later I was also happily chugging away. There’s a reason every culture in the world eats fried dough in one variety or another*. Post dough I found myself drowsy and werewolfishly desirous of caffeine so I asked the dough man where the best cup was.

The coffee was unkoreanly rich and strong and the cafe was neither a chain or ugly. In fact it was quite cool. You know, wooden, simple and full of beautiful young women with nice smiles and clothes that say ‘I’m successful but I still like art’. I sat down with some and asked what I should eat next. They laughed with hands over their mouths and told me to sit with them. We talked about how funny it is that so many things are ‘good for man’ in Korea and then they invited me to lunch. 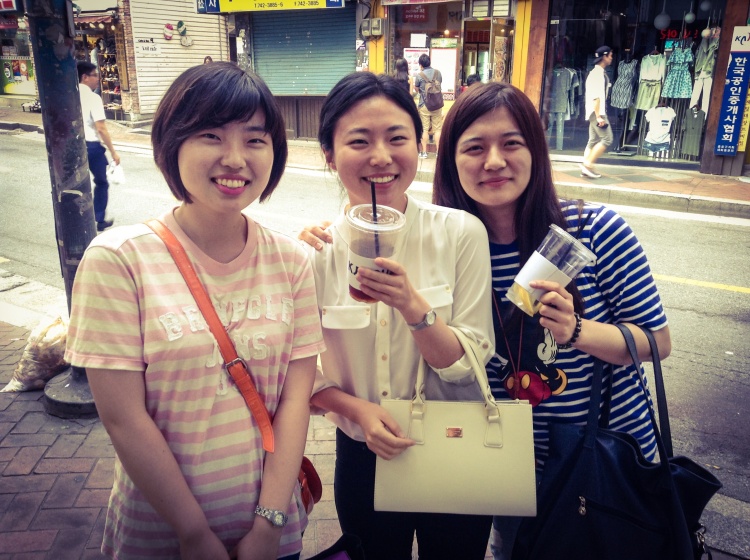 “We’re going to get rice balls. Would you like to come with us.”

Yes. I think I would like that. I do love board games but I know my priorities.

When Chris and I returned to Daehee and Yung’s house this was on the table.

I got tipsy (potentially just a delicious food high, the chicken stew was amazing) and told my three companions everything I thought about Korea. Six hours, four soju bottles and several world problems solved. Good night everyone it’s 3:30am again.

The next day Daehee helped me pack my bike and offered to drive me 40mins to the airport. I was pretty overcome with how fantastically handsome and helpful my hosts had been so I bought them this.

Incheon’s most famous organ soup with a side of blood sausage guk bap because why not? Such a worthy last meal in Korea. The soup was packed with chilli, perilla seeds and the most tender, flavoursome tripe I’ve ever had*. When we finished they cleared out the left over shallots and bean sprouts and whipped in some crispy rice and dried seaweed.