Sitting next to me on the plane was Jacqui, a retired fashion designer with dragon glazed eyes and chargrilled slug eyebrows. At first she was rather shy, only turning every few moments to ask me something about my trip or life at home. Whenever I answered her distinct eyes would open up and flitter about like dancing abalone. I felt like I was sitting next to a friend’s mum at a loud dinner party.

Typically I asked Jacqui what I should eat in my 14 hours in Tokyo. Without much thought she told me to go to Harajuku to get some ramen at a shop called Jangjuru.

Sometime later, when she’d gained the courage I guess, she said;

“I’m going to Harajuku actually. I will take you there.”

I spent the train trip asking her which other passengers she thought were fashionable and which advertisement men were handsome or hot. She told me Australians are poorly dressed and the people of Milan are very stylish.

“Tokyo is the best though,” she said with an commanding nod.

When we arrived at the ramen store she opened up her wallet and handed me a wad of cash – it looked rather exorbitant. I told her I couldn’t accept so much money (having no idea how much it was).

“You can pay my daughter back in London.”

“I’ll only be in London for one night. I worry I won’t be able to give it to her.”

She cut three 1000 yen notes out of the wad and handed it to me with a pleading face. I bowed, said thank you as sincerely as I could and waved her goodbye. 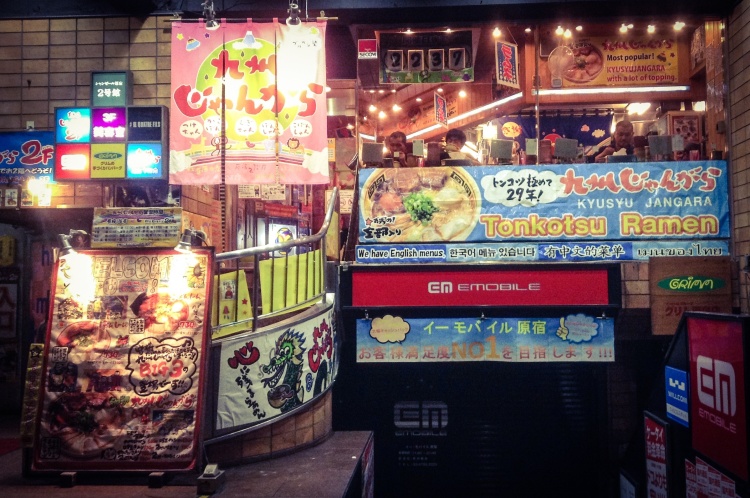 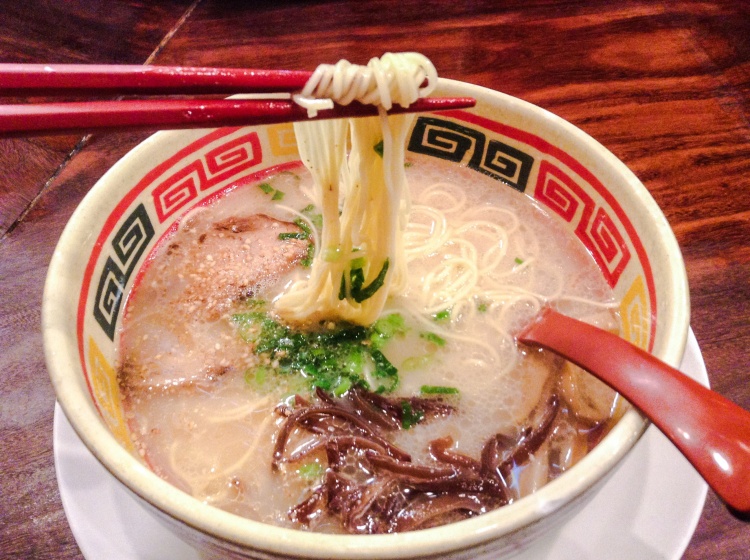 Fucking goooooood tonkotsu ramen. Thick meaty stock which lines your tongue like it wants to have sex with it, long hand cut noodles cooked so they’re still a bit chewy and the most deliciously salty, savoury and umami-y? piece of pork I’ve eaten since that cosmic backbone in Buyeo. Usually tonkotsu makes my stomach feel like a dam at the end of an estuary full of abattoirs but this one didn’t.

About ten minutes later, while pacing past a queue of empty Harajuku department stores I saw another ramen store open and full of people. Everyone inside was drinking beer and laughing. I felt like an orphan in a christmas movie montage. I stood there for about ten minutes wondering whether my stomach could handle another bowl of liquid meat. I decided it was probably better to fill that space with a different taste.

Jacqui said when I’m done with the ramen I should head to Shibuya for Yakitori (grilled chicken), or whatever the hell I want because everything is there and open all night.

It’s the kind of super shopping, kind of great, kind of awful, mega suburb where all the ads are bigger than your house and there’s more people than molecules of oxygen. I had no idea where to go when I arrived so I just milled around a djing saxophonist until some cool looking students approached.

“Hey do you guys live here?”

“Hey you can eat at all these boring fast food places or you can go to this yakitori restaurant where all the drinks and food is 280Y.”*

Well that was an obvious decision. I chatted with them for a while more in the hope they would join me or ask me to dance with them later. Unsuccessful. . . Whatever, the yakitori restaurant was the shizit*.

I got two garlic chicken heart skewers, two BBQ chicken skewers and a pilsner. The hearts were soft as I’ve ever had and deliciously bloody. The chicken was tender and juicy as you could ever wish chicken to be. The sauce was sweet and meaty and I licked the plate.

I blasted away two hours looking for a diner recommended by two pretty girls in fur coats. All I found was a bunch of hookers and some awkward jiggalos. I gave up around 2:30 and asked these two wasted fat guys for a new place to eat. Pepper lunch they said.

Things are getting pretty desperate at 2:45. Sure it was tasty but it was just thin slices of Australian beef sizzled (by me) with some rice, corn and sauces (of my choosing). It’s a pity I couldn’t end my only night in Tokyo with some takoyaki, sashimi or something.

I spent my last hour and yen in a strange Internet cafe that looked and felt somewhere between a smokey jazz bar and a recently refurbished public library. At 5:00 I wearily stumbled onto a train back to the airport.

This is my last stop.

There’s still a few hours before my flight to London. Time to sleep.