Imagine a tornado made of food. It’s swirling around in a grotesque Akira like mass – slurping, churning and burping. But this tornado isn’t whizzing around recklessly flinging out food like an ignorant charity – it’s spinning constantly in one place, my mouth.

Our journey through Rome:

It was raining like buggery when we woke up – the weather equivalent of getting sloppily mouth raped by a warty troll rushing into adolescence. Consequently our enthusiasm for joining the tourist conveyor belt for old buildings was somewhere around -76. This is what we did instead: 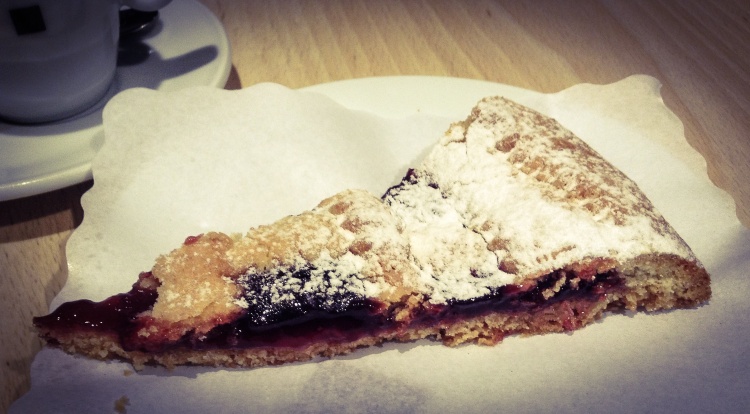 An espresso and a slice of cherry pie for 2.50 Euros.

“Rome, how did you know I like pie so much?”

“I know everything Nick.”

“How many pairs of socks do I own?

We finished our morning of cake worship and the rain stopped. Off to the next stop – Pizza Remo, the supposed best pizza in the city. We didn’t quite make it. We found this on the way.

“Are they fresh truffles?”

“Do you want to try this cheese? It was aged in Sicilian Marsala?”

What kind of ridiculous food paradise is this? Selena later told me that while I was slobbering uncontrollably in the nougat corner the cheese guy let her try some other goodies. Inside this silly little deli was another Australian, one of those squeaky voiced women who speak mostly in meaningless phrases.

If I had synethesesia I would have felt lemon juice flowing into a body covered in paper cuts.

She was waiting for a foodie friend of hers. They’re working on starting some food tours through Rome and they were sussing out the best places. This was their favourite deli. They told us not to worry about the Pizza joint – go next door to the tavolo caldo, it’s run by the same deli.

We found it hard to trust them – maybe because they were Australian, maybe because her voice was eroding my enthusiasm for life or maybe because we’re both judgemental nobs – but Pizza Remo was closed so we went with their suggestion.

Tavolo caldo literally means hot table – everything is served cold but it’s an in and out no frills kind of affair. This one just happened to be sourced by the best deli this side of Hvar. Everything is priced by weight and for a greedy glutton with no restraint like myself, it can be quite expensive.

This is Donato the chef, he pretty much demanded that we take pictures with him

$16 euros. Pretty tasty shit. I think it was worth the cost but I’m still not entirely sure. You can get a freshly cooked meal for a lot less. Maybe it would have been better just to buy stuff from the deli itself?

Did you know trolls grow up to become sexy ass supermodels? Selena hadn’t been to Rome before so at some point we were going to see old buildings. It was a good a time as ever – we were too full to do anything else. 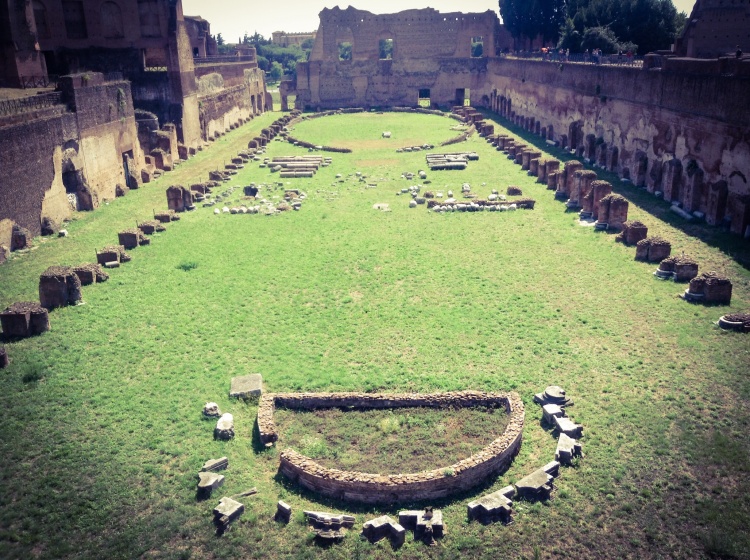 We had a nap in one.

While in the ruins I had four main thoughts:
1. What do non-Roman Italian tourists think of this stuff. Do they think it’s epic or boring? Are they patriotic about it or do they think it’s contrived?
2. I’m completely incapable of imagining what ancient civilisations were like. Sure I can imagine what they looked like but what did people do all day?
3. (after sining for several hours) Does Selena really hate Total Eclipse of the Heart that much?
4. Maybe if I walk up these steps three at a time I can fit a fifth scoop of gelato in. 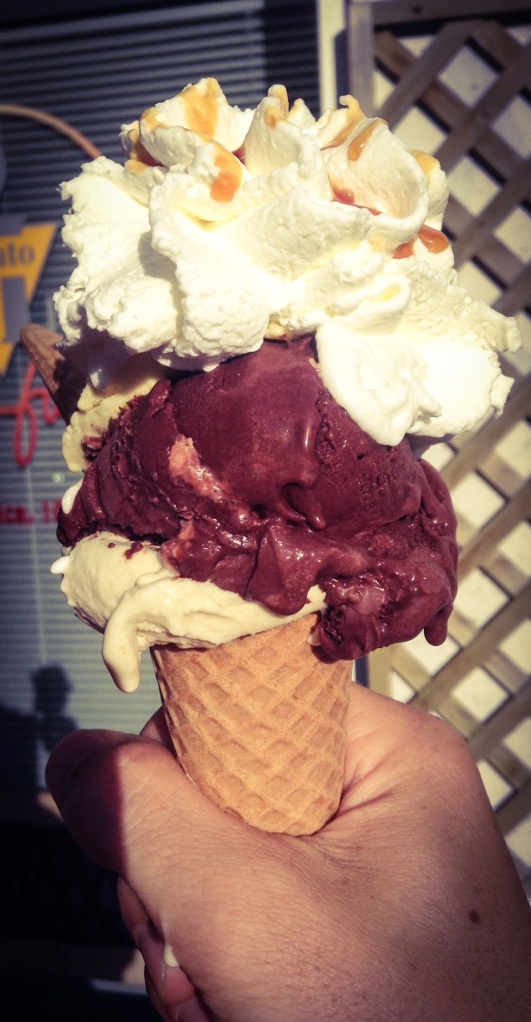 Zabaglione, Bronte’s dream (pine nuts, pistachios and almonds) and Intense Chocolate. Best gelato I’ve ever had. I don’t say that lightly – I fucking love gelato and I’m proud of my knowledge and taste for it. Seriously, it was fucking excellent.

Our sleep schedules are fucked. Music festivals, hitchhiking and writing this blog for an audience on the other side of the world have made for pretty irregular sleeping times. The worst side-effect of this is we often miss meals. We wake up for lunch and then eat dinner at the normal time, then we go to bed late and hungry. That may be acceptable in Croatia, Bulgaria or some other flavour deprived region of the world but here I was having none of it.

At about 10pm – three hours after gelato. 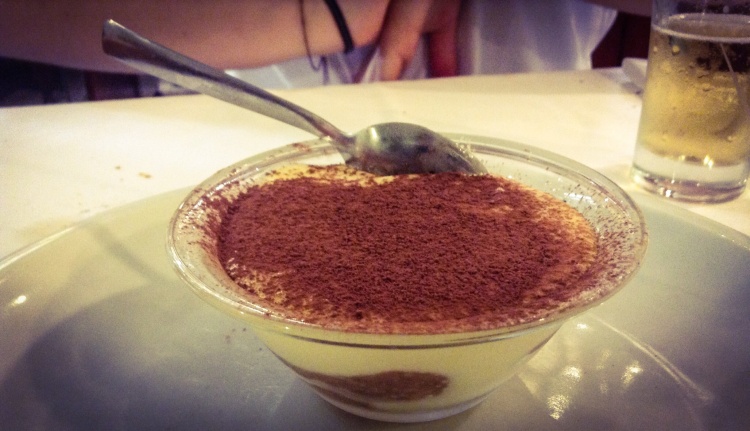 Disregarding the gelato, yesterday’s lunch was the meal I was most excited for. I had read in a few different places about a restaurant hidden away in Rome’s dodgy artist suburb, Pigneto. Osteria Bollini was the name – very Roman, very cheap and completely absent of tourists they said.

It’s only open for one hour at lunch. The menu is written each day on a blackboard and changes at the chef’s will. Most things are around 6-8 Euros. When we got there at 12:50 it was completely empty. Within ten minutes it was packed. I have no idea what being Roman means but I would guess it’s something like this. 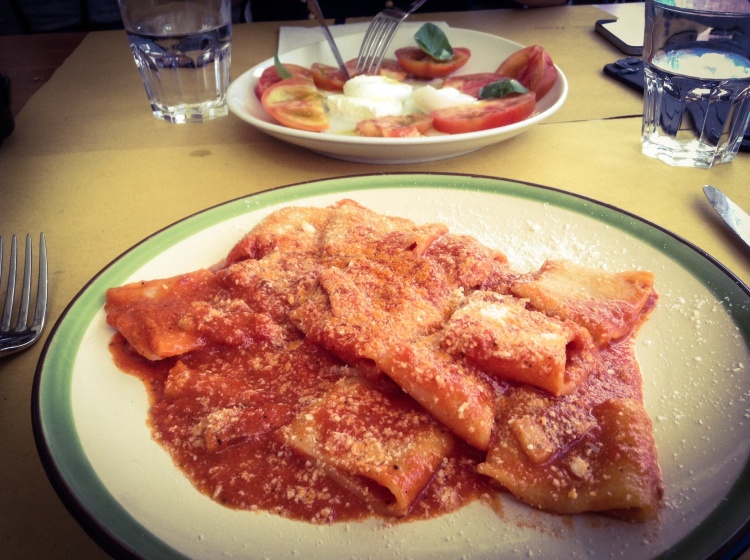 If this was near my house I would eat there all the time.

I had some grand plans to to visit a few more places that afternoon but our lunch really conked us out. We had eaten the perfect winter meal on a sunny 26 degree day.

This is what we managed.

Travelling in Asia has made me appreciate sweet coffee more than I ever thought was possible – this was another level of excellent. I could drink one every day.

Our last stop. Supposedly Rome’s most famous bakery. I loaded us up with some salty shreds of pizza bianca (like bare salty focaccia, their speciality) and a bag of treats. We gorged and left for the Vatican. We didn’t stay for long because a bird shat on us. We were blaspheming at the time.

We spent the rest of the night with Niki, a good-humoured turkish-Roman who’s spent the last ten years sampling the biggest cities in the word. She works in the tourism industry and knows her shit. Together we got drunk, adopted a New York pilot, had a shots in chocolate glasses and went home. I don’t remember what we talked about but I remember enjoying it.

I want to say something about Roman food and it’s perception. I take eating very seriously. While I was in Rome I didn’t want to take anything by chance. I knew there was a lot of touristy shite in the city and I didn’t want to waste any meals eating it. Usually I would ask locals where they eat but this is how most of my conversations went (mostly in broken Italian):

“Excuse me. Where do you like to eat around here?”

“Ok. Where is really excellent?”

“Where are you from?”

“Everything is excellent for you.”

So many people said that me. How many of them have even been to Australia? Many people would just point at a random place and tell me Rome has the best food in the world – ‘anywhere is good’ they would say. I couldn’t believe how arrogant everyone was. There’s shit food all over the place. For most of the meals I ate in Rome I spent about half an hour doing research. Most of them were great but not more so than anything I’ve had in Sydney.

I definitely need to spend more time in Rome to gain any clarity about this but it feels like the cuisine here is protected by the grandeur of the city. Sometimes that can be an excuse to produce food with less care. A lot of restaurants know they can make poor quality food and charge a lot of money because tourists will be convinced of it’s quality by their preconceptions of Rome. Maybe once upon a time everything was excellent but now after decades of tourism the standard has probably dropped a lot – I don’t know, I can only speculate. All I know for sure is it takes a lot of effort to find good food – that’s not exactly the sign of a food paradise.