I’m swimming in it. Absolutely fucking drenched. If I was any more in it I’d be drowning – bubbles of laughter, shimmering smiles – drowning.

Verona is 150km from Milan – about two hours in the car. It took us four days to get there. This is what happened.

Giorgio being the eccentric guy he is, was really into ossuaries – or for those unacquainted (me) – creepy churches with human bones. Giorgio had an amazing book on where to find them, which ones are the biggest and why Catholics are weirdos. Thinking it looked like the magic spell book from charmed I had an eery squizz* while Ros played arthouse video games on Giorgio’s cinematic tv. I read there was a creepy bone church in Milan. Great, it’s only 150km to Verona. We can go check out some more dead Catholics then casually hitchhike to Verona in the afternoon.

It ended up being a kinda funny morning. We didn’t actually get to see any skeletons that day. The creepy part of the church was closed for Korean mass. Yep. Instead of ewwing and lolzing at even more creepy catholic shit we watched two young Korean women sing operatic hymns in one of Milan’s most famous churches.

They were beautiful and they had beautiful voices, if they were on an oceanic rock I would have crashed my ship and lived out my days as a boar, happy, plump an ignorant to the slaughter.

When the singing finished, we heard an incomprehensible sermon* and we walked out to find this: 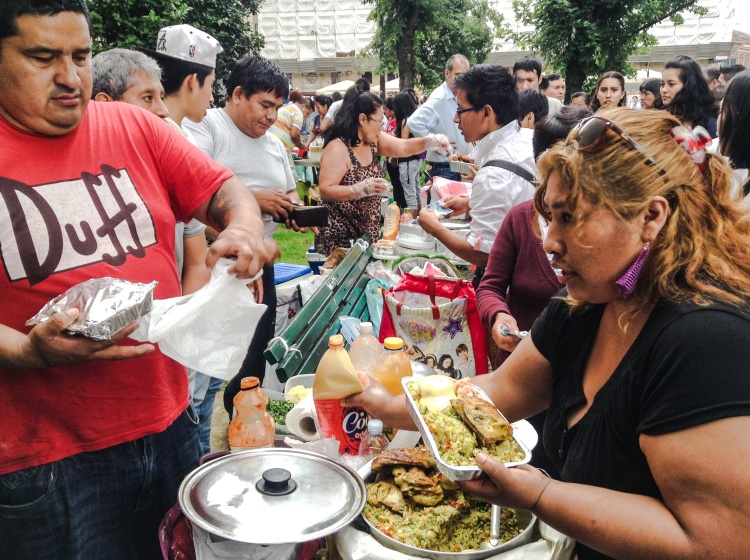 Next door to Korean mass was Latin American mass and now the Milanese citizens of Peru, Ecuador, Colombia and El Salvador were enjoying a traditional post mass feast. 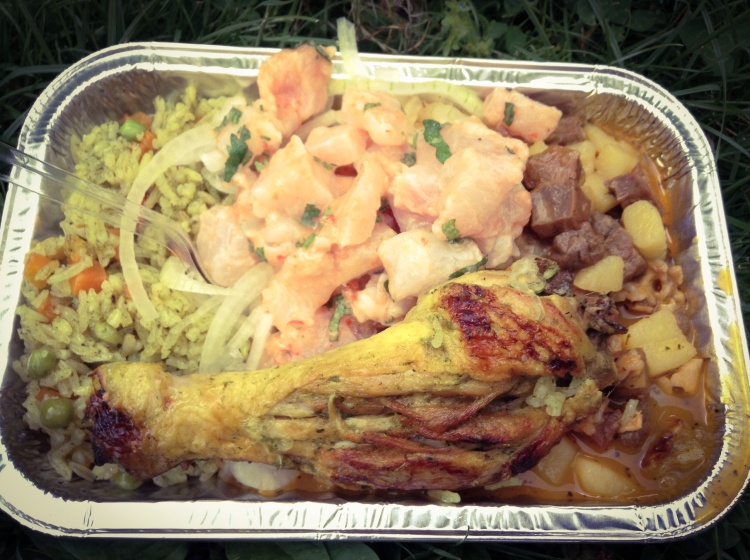 I wish I was part of a loving community which met every week for singing and eating.

Our first ride out was simple but sometime later we got stuck at a quiet gas station. We’d had a few offers to take us back into Milan or to the next town but no one was staying on the highway. After about 40mins we decided to take whatever ride we got next.

That’s how we met Ariana and Flavio. Ariana had amazing english, metallic black hair with a rogue streak and an ambiguous age. Flavio her dad, was a bobbly man with a sternly tucked shirt and a confident but froggy smile. They were just going to the next town.

“Where do you need to go?” Ariana asked.

“Verona but we really have no plans.”

“We’re going to a garage concert tonight in Bergamo. Do you want to come?” She means garage rock. I turn to her dad.

“Are you coming?” I ask in Italian.

I turn to Ros. We both laugh. I guess Verona can wait. 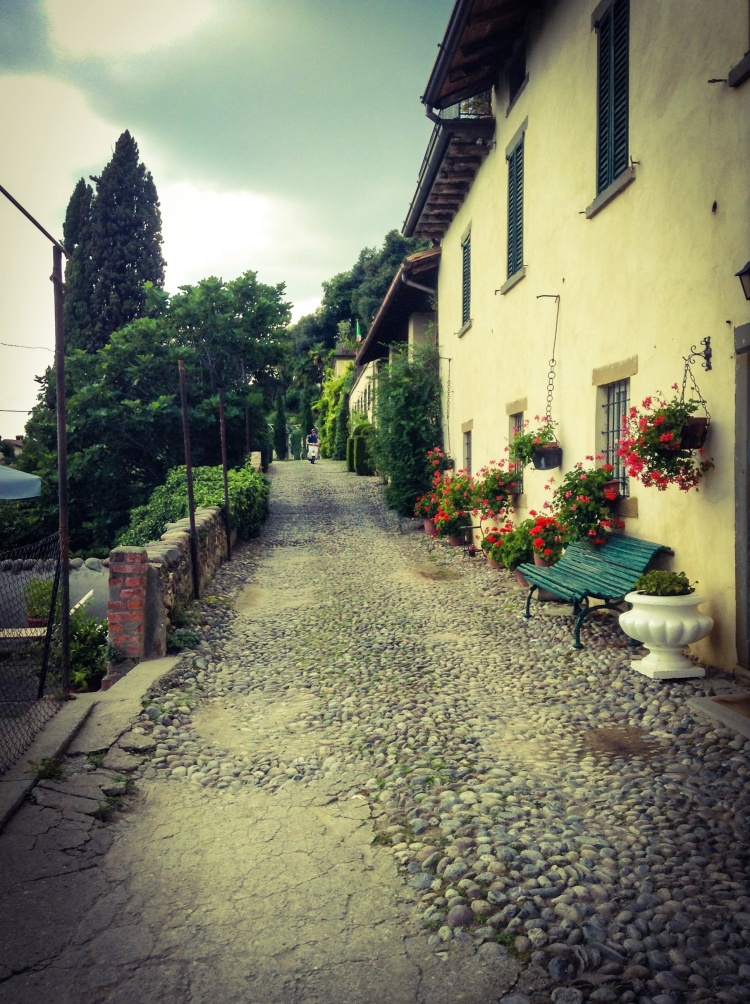 What a silly place for a garage rock concert. Apparently the family who lives in this Italian farm paradise give away their cellar space for free. The only thing they get out of it is that they get to sell their boutique wine and meat during the events. So while Ros and I listened to disenfranchised Italian farm boys sing about their small town boredom we ate locally cured pork paninies and drank wine from grapes we could see out the window. How weird and wonderful.

Everyone was right into. Flavio was yelping like a new born who’d just discovered hugs, the combed, buttoned and tattooed farm boys were bobbing and drunking and Ros and I were thrashing and whizzing with the kind of abandon usually reserved for drug addicts. I don’t know if it was our dancing or if it was just the novelty of us being foreigners but by the end of the night everyone was treating us like celebrities.

“Hey, you’re those Australians?! Are you the hitchhikers?! Hoho crazzzzyyy! Why are you here?! Where are you staying? Great to see you. Have my beer.”

Of course we had no idea where we were going to stay because we didn’t even know where we were. Didn’t matter though, our new friends told us the guy who organises the food had a bed and breakfast in town and would give us a bed. Great we’ll crash and head to Verona in the morning.

Well when we woke up we realised Bergamo looks like this. 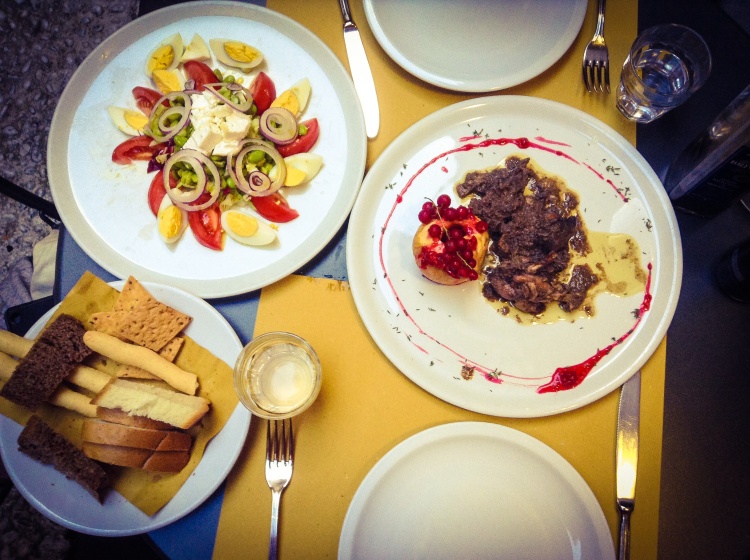 Pheasant stewed in red wine with a baked apple and local berries. Salad with tomato, feta and egg. Bread 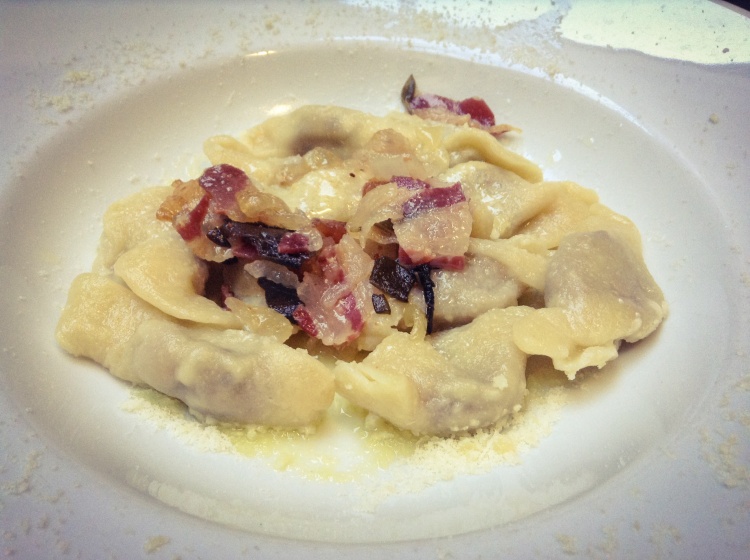 We met our festival friends again that night. We had a jolly time talking about hypothetical things and political disenfranchisement and then they invited us to come to another small town on the weekend for a festival of 50s and 60s rock and roll in a cheese farm. Excellent, I’ve always like cheese.

Next morning and another attempt to get to Verona. We got our first ride easy enough – rich dude with a nicely trimmed beard and a linen shirt I would like to own. He spoke perfect english with a strangely South African accent and he loved Cricket. Ros and I agreed that he was sexy in the same way George Clooney is. Our man cricket clooney was driving about half way to Verona near a place called Peschiera. There’s a big nice lake there he said.

By the time we arrived it was only 12:00. We had time to check it out so why not. We hopped across the highway and thumbed on the lakeside. Almost instantly we were in a car with a pregnant Cuban, her laddy husband and their son. They dropped us off at the lake, told us where to get some rotisserie chicken for ?6 and said ‘if you wanna ride outta here meet us at again at five’..

I remembered Christian, the laddy husband, had said something about football, Brescia, eating and Verona when he dropped us off but I didn’t really understand because of my crap Italian. When we met him that afternoon we didn’t really know where he was going, what he was doing or why we needed to meet him but we’d already ridden the wave this far so fuck it, whatever happens is happening.

We found out later Christian had actually said was something like I’m not going to Verona, I’m going in the opposite direction to my hometown Brescia to play a football game.

So without really ever understanding why, we ended up here.

Christian’s team lost – maybe because Christian, one of their best players, had smoked a finger-length doobie while he drove there. It’s pretty hard to score goals when you’re as zammed out as an anaesthetised yak.

After the game we ate roast cheese, casoncelli and a piadina with Christian and his mate Billy. Billy’s not his real name, that’s the one he uses online because either a) he’s got troubles with the police or b) he is quite well known locally because of his real name means something funny in Italian and he doesn’t want his private life on the internet. He had big curious eyes and talked loudly with his whole body, everything waving and thrashing. He told us his wife, ‘not like me, a serious woman’, worked at the reception for some kind of accommodation and could get us a cheap deal. ‘Not for people like us. For workers, doctors and errr . . . young footballers and things you know?’ Nope.

This was the place.

Creepy sterile. One of those places people go when they no longer comprehend beauty – a dimensia ward or an exorcism waiting room. We still don’t know what it was.

Christian offered to shout us some coffee the next day and show us around Brescia but we felt like we should finally go to Verona. We got there in under an hour.

*sounds pretty dirty
*I was proud to recognise a few words