I love wearing my jersey. It’s like holding a giant sign above my head with a whole bunch of memories on it. It’s all written in code though and only certain people have been educated to read it. I can’t think of any other popular symbol quite like it. Maybe burkas or mason tattoos are comparable but they’re not as powerfully descriptive. My jersey doesn’t just say I belong to this group, it says these are all my memories, these are my heroes and these are my dreams. Any other fan will know exactly what it means.

On Wednesday (game day) I had lunch at a rather fancy cafe in an even fancier area. While I was sitting down reading the menu an old man with a younger couple sat next to me. The old man, big head, roughly combed hair and a voice fit for movie trailers, saw my jersey and asked me if I was going to the game that night.

“Good man.” He said rather authoritatively.

I asked him about his thoughts on who should play up front and how the last game went. He said Sanogo is shite, Alexi should start – we got chatting. After we went through the squad and then our opponents we moved on to non-Arsenal related topics, most memorably of which was a story about a honeymoon party he’d attended earlier in the summer. The honeymooners hadn’t told anyone where the party was, instead they’d hired a private jet to fly all sixty guests to a surprise location – a temple in the Indonesian rainforest. But they didn’t just simply fly there, first everyone was flown to Sri Lanka as a joke.

What kind of rich motherfucker flies sixty people to Sri Lanka as a joke? I was clearly impressed but before I could ask any questions the younger guy leaned in to whisper something.

Well then. Don’t hear that everyday. I didn’t know how to react so I laughed. I didn’t know if the older guy had heard but he didn’t seem to react. He just sat there grimly smiling like someone who’d succusfully bet on their team to loose.

They picked up my bill. As we were saying goodbye the younger guy turned to me and pulled out his card. With incredible sincerity and some unnerving eye contact he said:

“Nick, it was so lovely to meet you today. If you need anything, anything at all, please call me.”

The game was a Champions League qualifier against Besiktas, a Turkish team. When I arrived at the stadium this was happening.

Football has an incredible ability to turn normal human beings into horrible vulgar bastards. These guys were some of the loudest, angriest bastards I’ve ever encountered. One particularly dirty cunt was waltzing around in a Manchester United jersey shouldering people. Whenever anyone reacted he’d give them the eyes, throw his cigarette down and spit. He was by far the worst though, most of them were pretty safe, they only looked like dodgy bastards because they were passionate. It was probably just a party for them – they weren’t expecting to win – they haven’t been in the Champions League for four years. They’d come for a good time. 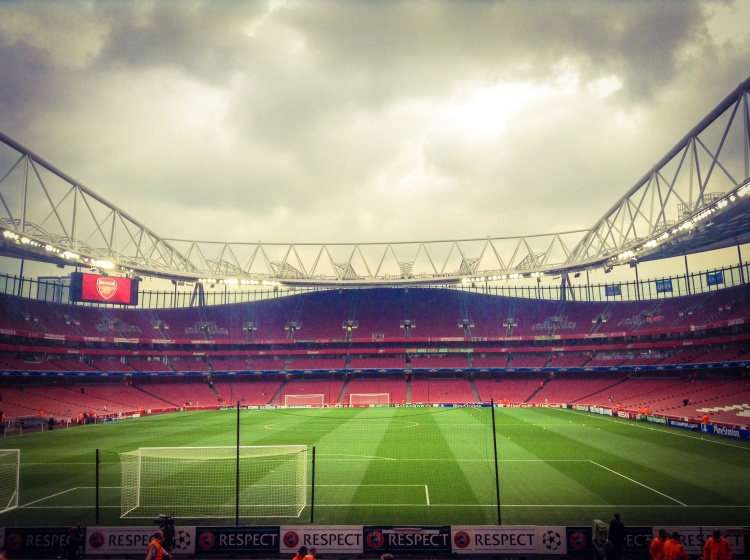 I sat facing the goal net. Behind me was Arsenal’s loudest and most faithful.To my side were thousands of the dirty bastards I’d just been acquainted with. As soon as the players came out tt was thick and it was loud – the atmospheric equivalent of swimming in an electrified jar of peanut butter. I remember thinking to myself I can’t fucking wait to see that net ripple.

Arsenal started well – not particularly whizzy but extremely comfortable. We had a few good openings and I even flirted with the idea of feeling relaxed. Ha! Our chances quickly dried up and any comfort I felt quickly dissolved into a big stressy stewy mess.

Fucking come on! We scored in the 45th minute with almost the last kick off the 1st half! A lovely little combination between Ozil and Wilshere opened some space and Alexis, our newest signing and hero, fizzled it in. I never saw the net ripple. As soon as that ball was on its way I was flailing and yelling like the most ecstatic dirty bastard on earth.

The second half kicked off and we were invincible.

We had a few good chances and it was only a matter of time until we got the second goal. But no, this is Arsenal. Of course it won’t be easy. In the 75th we got a red card. Our right back went in for a meaty challenge, won the ball, the referee had a brain seizure and we had one less man.

To describe how stressful this was I’m going to have explain some technical stuff. In the Champions League drawn games are decided by the team which has scored the most away goals. An away goal is a goal scored in the stadium of your opponents. Arsenal didn’t score any goals in Turkey so if Besitkas were to score in London, any draw would end up in a Besiktas victory. So it was the 75th minute and Arsenal had ten men.

It completely changed the momentum of the game. Besiktas saw an opportunity and fucking went for it. I spent the last 15 minutes either hiding my head in my lap or jumping up and down like a spastic rabbit. Near the 90th minute Besiktas had the ball near the edge of our box – there were a few interchanges and the ball was whipped in.

The entire 90 minutes could have been condensed into that second. The ball slowly twirling down towards the Besiktas striker. Him jumping and all our players looking on helpless and afraid.

But it didn’t happen. The striker missed and the ball sailed out. It was the end. We’d done it.